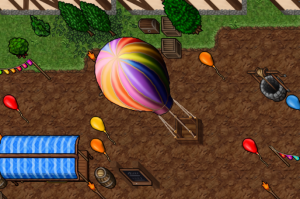 This anniversary event celebrates the yearly anniversary of the launch of the Legacy game-world (and so now over 11 years of Medivia being online).
The event will be active on all worlds starting from July 29th and lasting until August 28th.
The players' objective during this event is to hunt hostile creatures and collect the ingredients they drop, then turn them in to Confectioner Lorraine (found at the market square south of the depot in Eschen here

) in exchange for Anniversary Tokens which can then be used to buy unique items. Lorraine will use the ingredients to prepare a massive cake for the whole world!
Lorraine will require 30000 bags of flour, 24000 vials of milk, 18000 bags of cocoa powder, 12000 bars of chocolate and 9000 anniversary candles so you'd better help your world complete this hefty challenge!
The world cake will be consumable by all players once it's complete, and those who help more will receive more and better boosts. Daily 2 hour buffs once cake is completed, depending on amount of tokens earned by the player: