This article may contain quest spoiling information
You may choose to show or Minotaur Hell Quest this information.

Also known as: Tuck Sword Quest
Reward: Tuck Sword, 4 Poison Arrow, 10 arrow and a Fishing Rod
Location: Novus
Level required: 2
Be prepared to face: Troll, Spider, Wolf, Orc, many Minotaur.
Legend: There is a book in Mino Hell saying: The mystic portal remains unstable so reinforcements from Mintwallin seldom arrive here. The royal mage managed to impress the primitive local orcs though and we can use them as slaves and runefodder. The trolls surrendered immediately and can be used for lesser services.The human base has to be destroyed since more and more arrive there. These enemies are not strong but their number might cause some problems. As long as they will be revived at this mystic vortex even they can ruin our plans. We have to figure out how to destroy the vortex first. The mage locked himself up in his quarters and wants not to be disturbed anymore. He entrusted me with the duty to coordinate all our actions here. 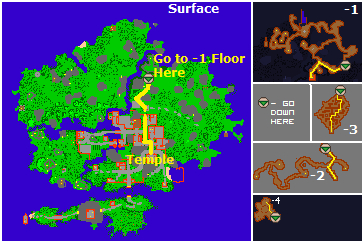 From the level 2 bridge, head north to the main Novus cave (here). On the -1 floor, expect to find a rat, a few trolls and maybe some spiders. Follow through the cave to the east until you reach a ladder going down.
On the second underground floor (-2) you may find one or two orcs. Head north, follow the first cross-section north-east, and second north-west until you reach another ladder. Descend to the third underground floor and you will be in the Wolf maze.
Follow the path north through the masses of wolves and orcs to yet another ladder. This is the beginning of Minotaur Hell.
Watch out. When going down the ladder, there will be about 2 minotaurs, 8 orcs and some wolves. Here, it is imperative that you single the monsters out. There is a position to the north of the ladder where only two creatures will attack you (any more and your shielding will be broken and the damage of the third would only be mitigated by your armor). Ideally, you would take care of the wolves and orcs before the minotaurs as they take less time to dispatch.

Using a single box, only two minotaurs will be able to attack you here.